This weekend, after some frantic schedule changes and hurried costume acquisition, I experienced my first time Trick-or-Treating as an adult.  And let me tell you… What an epic time!

Before I get into the experience, here’s some background info:

My boyfriend, Chris, has an 8-year-old daughter, J, and this is my first time spending Halloween with all of us together.  So it also means that I’ve jumped right in to knowing the complicated ways of Trick-or-Treating, which means that I’m learning all of these unspoken Halloween rules, three of which I will share with you now… 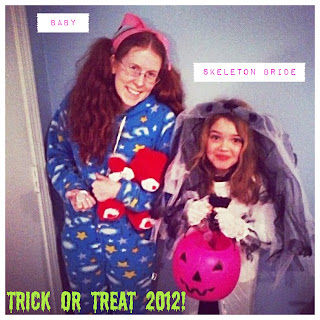 No, but seriously.  Maybe I’m just having selective memory on this, but I do not recall getting 6 or 7 pieces of candy per house visited.  I would never deny that I always, always made bank on Halloween Night, but my neighborhood made me work for it!  Every so often there would be a house that gave away bags of assorted candies (cha-ching!) or the infamous house down the street where they gave away KING-SIZED BOXES of treats — where even the bigger kids would switch costumes at least twice in order to get their money’s worth from Halloween — but that was a rarity.  Usually it was one doorbell ring equals one piece of delicious chocolate and/or fruit-flavored goodness.
I don’t know why that’s changed, but I know I like it!

To be fair, this could be the result of J and I’s relationship currently, but she is TOTALLY willing to share her plunder with me (hence me being 100% in favor of Rule #1).  For literally the entire hour and fifteen that we spent striding up and down the neighborhood roads, she kept careful stock of her candy (particularly her supply of Reese’s Peanut Butter Cups – my personal favorite!) and would share with me how many pieces we were each going to get.  After the obligatory “Thank You” upon the receipt of candy, she’d stroll down the steps beaming and shout “Now we both have 5!”
I think this is seriously awesome, and not just because I’m in on the deal.  You see, I come from a family where I’m the youngest of three children and I do not remember ever wanting to share my candy with anyone.  I swear, I hoarded that stuff – even going so far as to disguise a king-sized box of Nerds as a book in my bookshelf, just in case my brothers ever decided to go searching for it.  So the fact that J is so willing to give up some of the spoils of her hard work seems so very awesome to me.

This rule is in bold because it is the most shocking thing I have discovered on my Trick-or-Treat Adventures.  I found this out because I was talking with Chris about my costume plans and asked him what he was going to be to take J out for Halloween.  He looked at me a bit confused and responded “…A parent?”  I stared back at him, shocked, and repeated the question – thinking maybe he didn’t understand me the first time.
But nope, turns out most parents just wear normal clothes to walk their witch/princess/ninja/Spiderman outfitted children around their suburbs.  And, I’ll be honest, this horrifies me!  Why in the world would you NOT want to join your children in a time when dressing up, being silly, and PRETENDING is the whole point of the evening?!
To make a long story short, I threw together a pirate costume for Chris (I teach children for my job, so I really did have one laying around the house), I jumped into some footie pajamas, grabbed a stuffed animal, and put my hair in pigtails (Instant Baby!), J put on her Skeleton Bride costume and we all went out the door ready to go.  It turns out that Chris was right – we only saw one other adult dressed up – but people thought it was great that we were all getting so into the evening.  And I also think it made the whole night more fun for all of us – how can you be grumpy when everyone looks so ridiculous?! 🙂
So I have to say, I had an absolutely wonderful time jumping into the world of Trick or Treating and I’m so glad to have been able to do it.  Also, in addition to a nice time collecting treats, going through the drive-thru dressed as a giant infant is an experience not to be missed.  I highly recommend it.
Share
Tweet
Pin
0 Shares
« BURNING QUESTIONS Answered!
Keepin’ the Faith »


Error: API requests are being delayed. New posts will not be retrieved.

Error: API requests are being delayed for this account. New posts will not be retrieved.